cchadmin Posted in Featured Projects, Training and Education
“Japanese Encephalitis (JE) pamphlet development is a challenging task: how does one disseminate disease information and preventative measures for general public health? Before developing a pamphlet, one should know the social and cultural backgrounds of the people. In Hindu and Buddhist culture, they have adopted the Mandala as an art form. So, Dr.’s Stitt, Hosein and the NZFHRC team designed a Japanese Encephalitis pamphlet based on the Mandala art form. This Mandala has been translated into the Nepali language.” 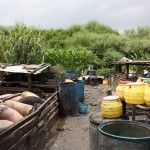 Dr.’s Shaun Hosein and Tyler Stitt met with Dr Joshi and his JE research team at the National Zoonosis and Food Health Research Centre (NZFHRC) in Kathmandu, Nepal to commence knowledge mobilization.  This involved  adapting research findings into an educational strategy to facilitate education, awareness and health promotion among the most-at-risk populations.

The NZFHRC research staff delivered presentations on key findings regarding the risk factors for  JE identified by the research already completed, after which we toured the pig farms in the Bhaktapur and Gokarna districts of Kathmandu.  These activities allowed us the opportunity to discuss human and pig health concerns with the most at-risk populations for JE, establish the presence of public health measures against mosquitoes already in use by these communities, and to identify on-the-ground challenges and opportunities for knowledge translation and health promotion. We then identified the key risk factors for acquiring JE, as well as the associated preventative measures. 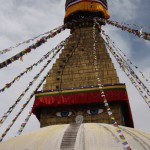 Although public health education can have numerous potential targets (government, educators, health professionals, community and at-risk populations) and methods for dissemination (high-level meetings, televised and print media, digital media, community outreach and one-on-one discussions), we chose to begin knowledge mobilization with the at-risk pig farming populations.  We identified a poster format for its ease of distribution amongst health clinics and communities, and as the anchor for additional future educational endeavours.  The poster contains 8 key public health messages for the prevention of JE, with a focus on people, mosquitoes, birds and pigs.  The poster draws inspiration from the Buddhist and Hindu mandala paintings of Nepal and India, and uses a combination of simple text and images to reflect the risk factors and associated preventive measures.  This poster, which is available in both English and Sanskrit, has been well received. 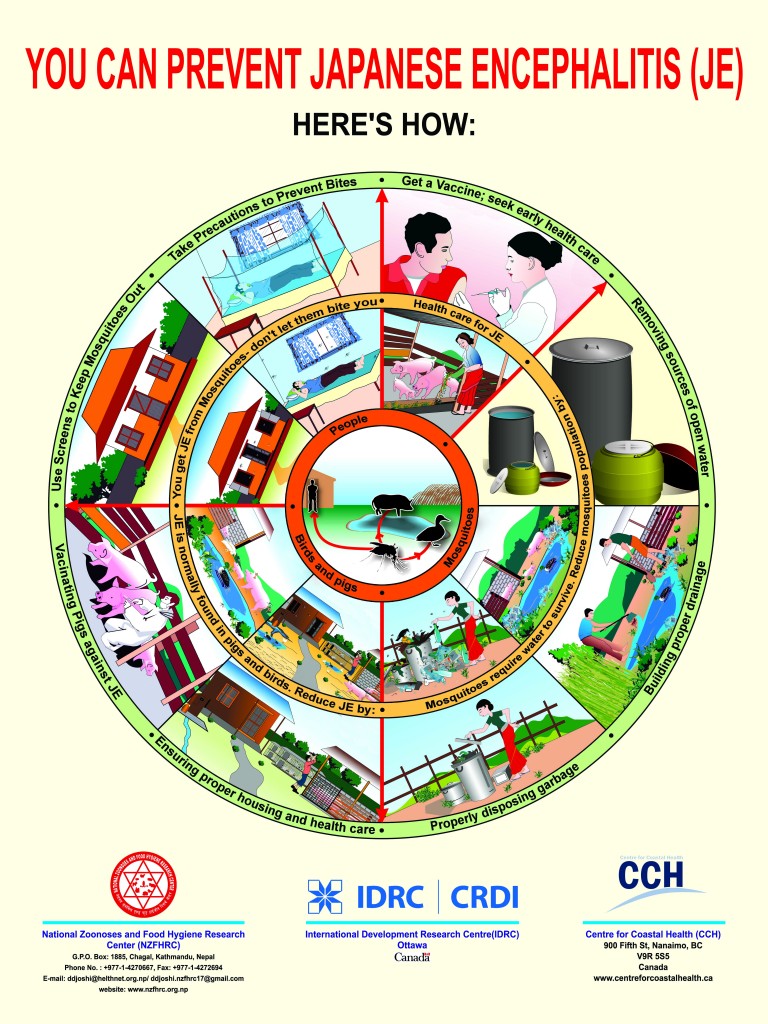