cchadmin Posted in Featured Projects, Food Safety and Security, Public Health
“Any change in the community structure of the supply reservoir biological community could theoretically alter the water quality. Although invasive American bullfrogs have been implicated in biodiversity loss, it is feasible that they may facilitate changes to both the aquatic and terrestrial trophic structures even when there is no loss of biodiversity.” 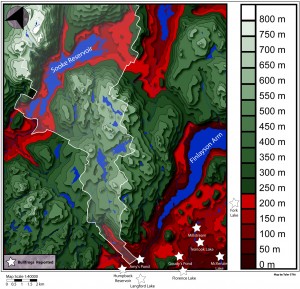 The American bullfrog, Rana catesbeiana, was introduced into western North America in the early 1900’s as a business enterprise to supply a culinary demand for frog’s legs. Unfortunately, bullfrogs escaped or were released from these farms, and by the 1970s wild bullfrog populations were endemic in many reservoirs, lakes, ponds and wetlands. As with other invasive species, founding bullfrog colonies typically enter suitable habitats through migration (natural or human-assisted) and undergo very rapid population growth, aided by an absence of natural predators and new sources of un-acclimatized prey. American bullfrogs can reach exceedingly high densities in certain water bodies, and negative impacts on native amphibian populations via competition for resources and predation have been well documented.

As a result of ongoing issues with this invasive species, a local water district contracted the CCH to determine the potential public health impacts of an incursion of American bullfrogs into its water catchment area. We examined three ways by which bullfrogs could potentially negatively affect the quality of the drinking water:

A structured literature review as well as interviews with local and international experts was conducted in order to answer these questions. We identified a number of key water quality parameters (e.g. bacteria, parasites, virus, odour, taste, dissolved solids, nitrogen, phosphate and primary production) and ecosystem health determinants (e.g. biodiversity, habitat restructuring, introduction of novel pathogens, and alteration of nutrient inputs or timing) on which to assess the potential impacts of bullfrogs.